Boy howdy, it’s been a long time since I last blogged! I really have no excuse other than… life. Ya know? That’s not to say that I haven’t been knitting up a storm. I have! Well, I suppose at the pace I knit it’s more like a light, steady rain. I’m currently working on this year’s batch of Christmas gifts (a zillion pairs of fingerless mitts), which I will blog about shortly, but first I wanted to talk about this crazy colorful infinity scarf that I made earlier in the year.

I saw a picture on Pinterest of a colorful knit done in a cross stitch kind of pattern and I knew I needed to do something similar. And this is what I came up with. Since then it’s been rather popular on Pinterest and a few months ago Folt Bolt featured it on FaceBook. At this time it has over 8,000 views on Ravelry, which is a ton in a my little world.

The most often asked question is, “Is there a pattern?” Well, no. There isn’t. That’s because you really don’t need one. It’s just one stitch knit until the desired length is reached. Sew the ends together and call it done. That’s it! But I realize that some people like step by step instructions so here you go.

What you will need:

Loom: I used the Tadpole loom by Authentic Knitting Board.

Yarn: This is the crucial part. This scarf would be very ho-hum without this yarn. Ready for it? I used 2 skeins of Misty Alpaca Hand Knit Chunky in Pico. Allow me to preach the virtues of this yarn for a moment…. THIS YARN IS HEAVEN ON THIS EARTH! It’s softer than any baby’s bottom. It’s more colorful than upstate NY in the Autumn. It is like knitting with butter coated angels dipped in sugar while singing Hallelujah. (The angels are singing. Not you).

The Stitch: This is a double knit stitch called the Figure 8. It creates a lovely, squishy, reversible double knit which is cross stitched on one side and stockinette on the other (see photo above). You can see how to do this stitch HERE. They call it a cast on but all you do is continue in the same manner for the entire piece.

And that’s it. Really.

To see my Ravelry page on this scarf go HERE.

11 thoughts on “Loom Knit Infinity Scarf of Many Colors” 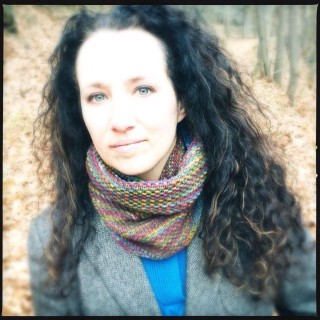